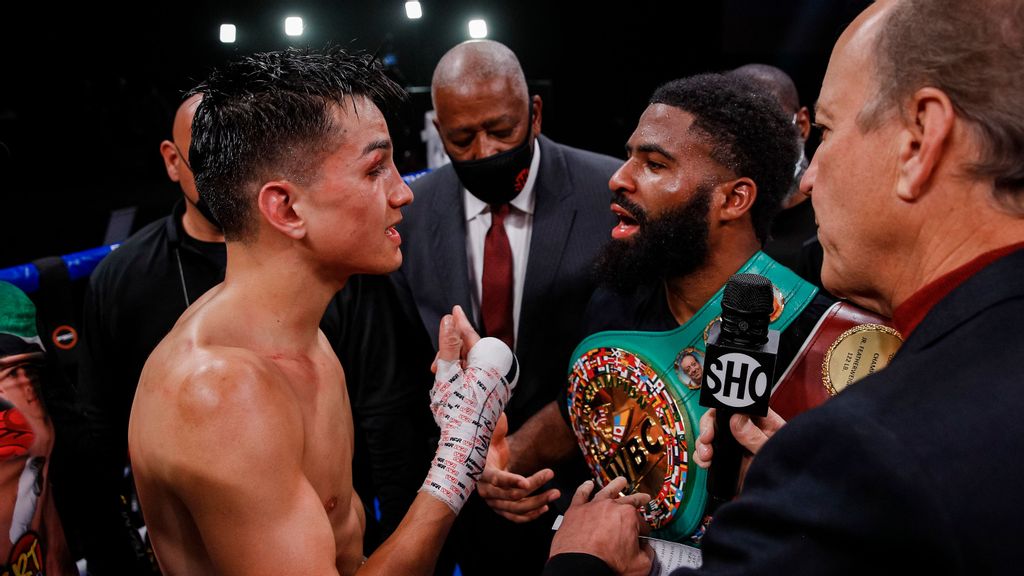 Although neither cashed in on his vow, they nevertheless engaged in a toe-to-toe, Fight-Of-The-Year-caliber classic that kept members of the crowd thrilled and either on their feet or likely on the edge of their seats.

In the end it was Fulton (20–0, 8 KOs) largely abandoning his stick-and-move routine during his disputed majority decision triumph over the ninth unbeaten fighter he has vanquished. The switch-hitting Figueroa (22–1–1, 17 KOs) failed to earn his third straight knockout and his 10th in 11 bouts despite wobbling “Cool Boy Steph” once each in the ninth and 10th rounds. (After the fight, Figueroa repeatedly disputed the result— more on that later.)

“This was a war. It was a tough fight against a tough person,” said Fulton, who became the first unified 122-pounder from his native Philadelphia. “It was a great, hard fight, and the fans won tonight more than anything. Brandon and I put on a helluva performance. It was a hard-earned victory, and I pulled it out.”

Fulton overcame disadvantages in height (5-foot 6&half;-inches to 5-foot 8 inches) and reach (70&half; inches to 72) against Figueroa.

“I had to deal with Brandon’s pressure by staying where I was. If I would have kept boxing, I feel like I would have gotten more tired than usual,” Fulton said. “I felt like I dealt with it by fighting fire with fire, which is why I was able to land more of the open shots to catch him in between his shots.”

A 27-year-old nicknamed “MJ,” Akhmadaliev made two defenses this year by winning a fifth-round TKO over Ryosuke Iwasa (April) and a unanimous decision over Jose Velasquez (November).

But Figueroa vehemently disagreed to the point where he interrupted Showtime’s Jim Gray’s post-fight interview with Fulton in the ring.

“You really think you won the fight?” Figueroa asked of Fulton.

“It was a close fight,” Fulton retorted.

“Nah, man,” Figueroa said. “Do you really think you won the fight?”

Stepping closer to Figueroa, Fulton emphasized: “It was a close fight. Yeah, I won.”

“I hurt you like five or six times,” Figueroa said.

“Everybody here knows who won,” Figueroa said. “Let’s do it then. I ain’t scared of you. I hurt you five times.”

“Cool Boy Steph” got off more quickly in the early going to win exchanges on the inside with crisp, head-jolting uppercuts and an occasional body blow.

“It was about making adjustments,” said Fulton, who alternately disrupted “The Heartbreaker’s” rhythm by tying him up with clinches and forcing him to reset. “My focus was deflecting a lot of his body shots as well as throwing some back. Not wide, but sort of in the center of his chest and the center of his stomach.”

“I was catching him in between the shots he was throwing. Yeah, he was making it a little sloppy and rough, and the ref kept saying I was hitting him low and things like that, but I was placing my shots. I don’t feel like he was outworking me because I was landing good shots on the inside as well,” said Fulton, whose father, Stephen Sr., worked his corner for the first time alongside head trainer Wahid Rahim.

“He was more active, but who was landing cleaner shots? I caught you in the middle of everything you were throwing,” the younger Fulton said. “He would throw a lot of wild shots, and the fans were getting loud over that. They were arm punches and back-of-the-head punches. It was an amazing experience and a tough fight like I said. But the judges made their decision, and we can run it back if there are any problems.”

Figueroa, 24, was unfazed and undeterred throughout the fight, inciting fans to chant, “Mexico!” as early as the second round. Sustaining his relentless body attack through the middle rounds, Figueroa distributed blows evenly and effectively to the body and ultimately to the head down the stretch.

“I applied the pressure the whole 12 rounds,” said Figueroa, of Weslaco, Texas, who pounded his right fist against his chest after the eighth round as he returned to his corner manned by his father and trainer, Omar Figueroa Sr.

“I landed the cleaner shots, I hurt him like five times, and I probably only lost four rounds of this fight,” Brandon Figueroa said. “The fans who watched this live know who won, and even [Fulton] knows who won. They just don’t want to admit it.”

“The Heartbreaker” gained traction between the sixth and 10th rounds by deliberately shifting his attack to the head and closing distance, appearing to stagger a doubled-over Fulton at the end of the ninth and 10th.

“It’s boxing. We get hit with shots that can buzz us, but the more you’re in shape, the more you can recover quickly,” Fulton said. “I wasn’t that badly hurt, because if I was, I wouldn’t have been able to continue. There were a couple of stinger shots that were eye-openers for me. But I wasn’t really hurt in the sense that I couldn’t defend myself. No matter how many times I get hurt, all I know is how to win.

“I bounced back in that 11th round by getting on the move like I should have earlier,” Fulton added. I felt like the 11th and 12th rounds I pulled out of those cleanly. I’m going to always find a way to pull out that victory, and that’s what I did tonight. This was special because the fight itself was a classic with action from round one to round 12. When you have fights of this caliber, and you’re the winner, it’s a helluva feeling. This is an amazing feeling.”

Fulton reminded Figueroa of his being two fights removed from a ferocious, split-draw in his second WBA title defense against former champion Julio Ceja (November 2019).

“This was a close fight,” Fulton said. “But if you’re going to say all of that, I can say that you lost to Julio Ceja.”

Ceja was 4.5 pounds over the 122-pound limit against Figueroa.

“Ceja came in two weight classes above me,” Figueroa said. “And I still fought him.”

Figueroa’s last victory was a sensational seventh-round knockout in May of previously unbeaten Luis Nery of Mexico, a 26-year-old southpaw who entered at 31–0 (24 KOs) and whose WBC crown was added to Figueroa’s WBA version. Figueroa was stripped of the WBA crown in August after four defenses of the crown he earned from Yanfrez Parejo in April 2019.

“I came to fight, not to hold on or anything. I brought the pressure the whole 12 rounds,” Figueroa said. “But they just want to make the fight [between Fulton and] MJ. I’m moving up [in weight.] I do want the rematch, but at the end of the day, it’s a robbery.”

Edited by Stan Chrapowicki and Matthew B. Hall