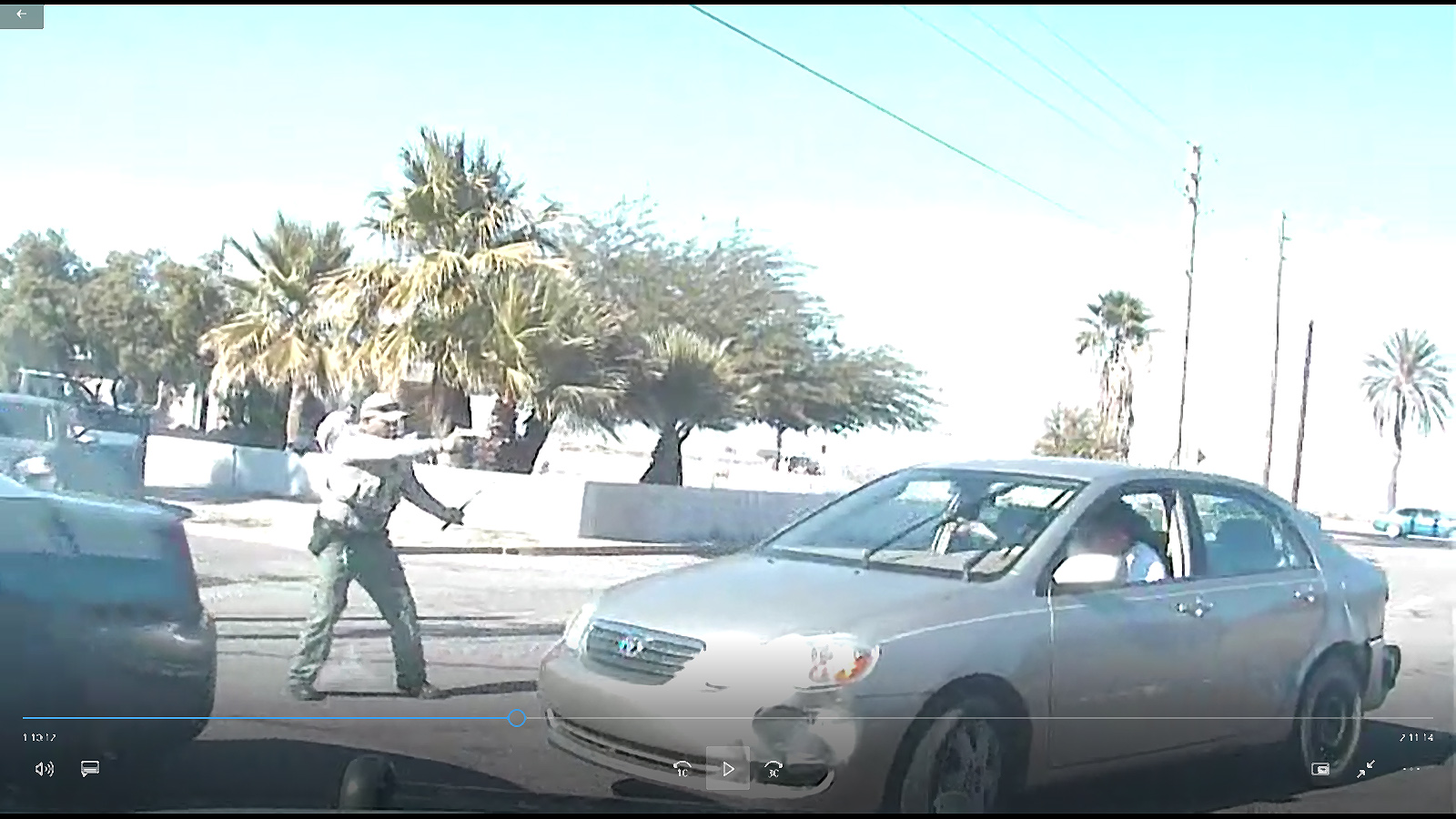 Manuel Longoria was carrying nothing but a rosary when he was shot to death by a sheriff’s deputy, 50 feet from where his wife stood watching in front of her house. Witnesses saw Longoria, 43, turn his back and thrust his hands skyward in surrender before his body crumpled from two AR-15 rifle shots. The shooter, Pinal County Sheriff’s Deputy Heath Rankin, says he thought the rosary was a gun.

The Jan. 14, 2014 shooting capped a 74-minute chase and standoff in Eloy, Arizona, a farm town halfway between Phoenix and Tucson where 57 percent of the 18,000 residents are Latino. Crowds of neighbors witnessed the incident, and some captured it on cell phone cameras.

Yet Longoria’s name remains widely unknown, and no widespread outrage erupted in a state that saw police fatally shoot someone every two weeks on average. Four days after killing Longoria, Rankin was back on the street. His boss, Sheriff Paul Babeu, told a local TV station he would have opened fire sooner than Rankin did, weeks before an internal review was complete.

But as protesters nationwide march for justice for George Floyd, who died at the hands of Minneapolis police in late May, the Longoria family now has what it’s waited six years for: a day in court.

A jury trial began Monday, Oct. 5 in a civil rights wrongful-death lawsuit in U.S. District Court in Phoenix, after the family won its appeal of an earlier dismissal.

Many central facts are not in dispute, but the interpretation of events is contentious. The case hinges on whether the jury believes Rankin and accepts that his judgment was reasonable in the moments before he squeezed off the two rounds.

“A jury must determine Rankin’s credibility in light of conflicting accounts from his partner, other officers, Longoria’s expert, and the videos in real-time,” the U.S. Ninth Circuit Court of Appeals noted when it remanded the case to Arizona.

Longoria’s lawyers challenge Rankin’s judgments, describing the killing as unlawful. They support that claim with a report that 50-year law enforcement veteran Roger Clark prepared for the team.

“Deputy Rankin should have perceived that Manuel Longoria was unarmed, and that his decision to engage Longoria was objectively unreasonable,” Clark wrote.

Rankin’s attorneys say qualified immunity insulates the deputy, then in his fifth year on the force, because he exercised reasonable judgment.

Longoria’s attorney declined comment, as did the Pinal County Sheriff’s Office, citing policy. Lawyers for Rankin did not return calls or emails.

A clear picture of events unfolds in documents reviewed by Zenger News that include thousands of pages of court records, depositions, and police reports; Longoria’s autopsy; videos; and hundreds of police crime scene photos. 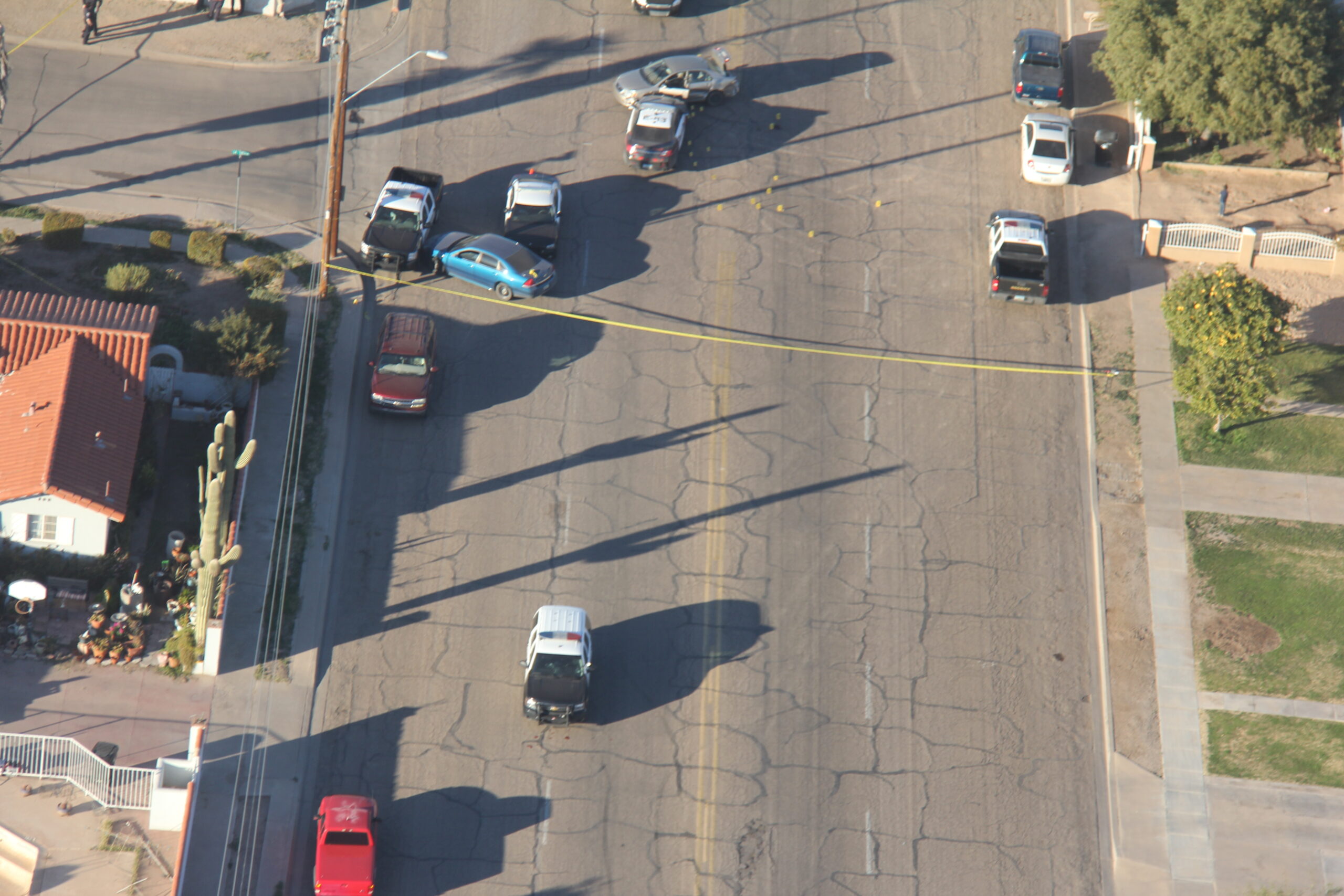 Rankin says he and Officer John Rice, whom Rankin was training that day, had responded to the call of an armed suspect with an arrest warrant driving a stolen vehicle. Longoria, distraught over a domestic dispute, was driving a car that belonged to his brother-in-law, trying to get to his wife Lynnette Longoria’s house on Main Street. (The two were separated, and Manuel Longoria’s brother-in-law was also his roommate.) Police had gotten a report of a stolen car at midnight, and spotted Longoria driving it around noon. They chased him for 70 minutes, sometimes at high speeds.

During the chase, Longoria stopped twice to get out and verbally confront police, holding one hand behind his back and telling police they would have to kill him. Both times, he got back in and kept driving without incident. During one of those encounters, Eloy police reported that he only had a wallet. Rankin later claimed he never heard that.

During the chase, police reported over the radio that interactions with Longoria were “high-risk.” Numerous officers, including Rankin, reported hearing on the radio that Longoria was armed, but none other than Rankin testified that they ever saw or believed they saw the weapon.

The chase ended when a county deputy clipped and disabled Longoria’s car on Main Street, and a standoff began. Longoria jumped out, but his door could only open halfway because it was pinned by a patrol car. Longoria stood with his back to the door, right hand concealed, facing about a dozen police officers arranged in a semi-circle and yelling at them as they commanded him to stand down. After Longoria refused to obey compliance orders, police shot him five times with bean bag and Taser rounds, prompting Longoria to lurch toward the partially opened car door.

Shortly before this moment, Rankin appeared at the end of the block. For 10 seconds, he sprinted across and down the street, in front of the line of sight of his fellow officers who had service pistols and rifles drawn, and waved off other officers to take up position near the throng. Four seconds later, the first bean bag round was fired. Three seconds after that, the last. Longoria turned his back and raised his hands. Rankin fired the fatal shots about 1.2 seconds later.

Rankin’s involvement in the standoff, and its fatal conclusion, lasted about 18 seconds. Autopsy reports showed that the bullets struck Longoria less than an inch apart below his left shoulder blade, piercing his aorta and both lungs.

Rankin’s defense centers on his belief that Longoria had threatened police and was reaching for a gun during the standoff. Rankin told deputies later that day that 15 minutes before the shooting, Longoria had approached his car, pointed what Rankin thought was a gun at him, and threatened to kill him.

Rankin also told investigators and lawyers that in the seconds before the fatal shot, Longoria had a dark or metallic object concealed behind his waist in his right hand, and that Longoria popped up in a “shooter’s stance” after being hit by the bean bag rounds. Multiple officers also say Longoria begged police to shoot him. Photos and videos later revealed the metallic object to be a rosary bead.

“He threatened to f—ing kill me down there. I thought he had a gun and I thought he was pointing it at me to kill me. I was scared I was gonna die,” Rankin told Pinal County Sheriff’s Office investigators.

But while all of the officers near Rankin had their weapons drawn, no one else fired—including Rankin’s partner, Rice, who was right next to him. Rice later testified in a phone interview with police that he never heard or saw Longoria threaten Rankin.

Rankin claims he never heard other officers barking “less lethal” during the standoff, a signal to use weapons like bean bags and Tasers instead of firearms.

Rankin claims he heard the order from his department to back off, which came minutes before another county deputy clipped and disabled Longoria’s car. But Rankin and Rice were the only deputies who left their post on the perimeter to respond.

Rankin was the only officer who reported Longoria taking a “shooter’s stance.” Other officers testified that it looked more like Longoria was flinching away from the pain of the bean bag strike. Several officers wrote in their reports they thought Longoria was reaching for a gun. But moments before the standoff, a deputy had circled behind the car, pointed his pistol at Longoria in the driver’s seat, lowered his weapon, and inspected the cab. Crime scene photos show keys on the passenger seat and no weapons.

Plaintiffs will try to question both Rankin’s judgment and his temperament. He had been in a fight with a suspect on duty earlier, according to his own testimony. And when he and Rice got the call for help, they drove at 100 mph for 10 minutes from the next town over to join the chase, already 30 minutes old.

Rankin has previously faced formal complaints for use of force.

As a trainee in 2009, Rankin sprinted past his training officer toward a woman reportedly threatening the public with a shotgun. When the training officer caught up, the suspect was in some gravel, bleeding from her face. She needed surgery for the wounds, but a judge dismissed her civil rights excessive-force lawsuit.

Police arrested Rankin on a domestic violence charge in 2011. The case was dismissed after Rankin was ordered into anger management therapy.

During this period, Babeu gave Rankin a raise and recognized him with an award that then-U.S,  Sen. John McCain presented to him at an Arizona Diamondbacks major league baseball game.

After Rankin’s personnel file in 2014 included no disciplinary action, he was promoted to sergeant, a post he still holds today. Babeu, meantime, later stepped down to run, unsuccessfully, for a seat in Congress.

“Deputy Rankin has been a good employee who has received awards because of his work,” Babeu’s spokesperson said in an email after the shooting.

“It’s a shame for how the incident ended,” Rankin said of the Eloy shooting in his deposition. “I understand Mr. Longoria has children. I’m sure he’s a son, a brother, father, cousin. I do feel bad for that. When it boils down to the ending of it, everything he did up until his physical action caused my reaction. I wouldn’t do anything different.”

01 – Complaint.pdf by Zenger News on Scribd

The post Justice Coming for Family of Man Shot Dead by Police Who Said Rosary was a Gun appeared first on Zenger News.