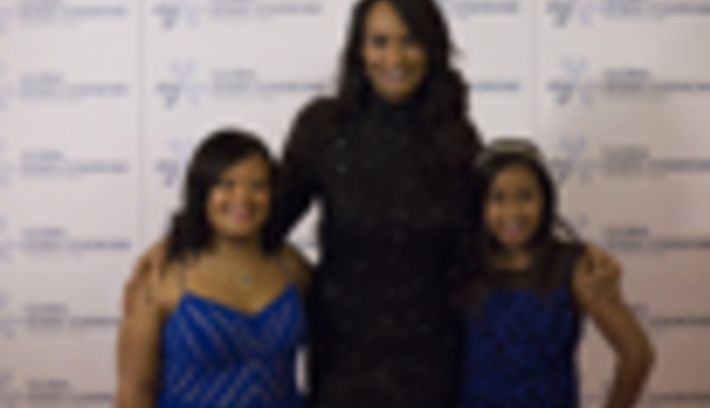 More than 1,200 supporters from around the nation turned out to watch people with Down syndrome strut the runway with celebrity escorts at the Be Beautiful Be Yourself Fashion Show on Oct. 25, 2014 at the Sheridan in downtown Denver. They also came out for the silent auction, the live auction and the presentation of two Quincy Jones Exceptional Advocacy Awards, affectionately known as the Q Awards.

This year Beverly Johnson, founder, chairwoman and CEO of BJE LLC, received the award given to people who use their celebrity to help with Down syndrome and other development disabilities. Brad Hennefer, 25-year-old self-advocate, also received the 2014 Q Award. He is the inspiration behind the Brad Hennefer Golf for Life Foundation that has been providing golf athletic opportunities for individuals who have Down syndrome since 2006.

The sixth annual event is a fundraiser for the Global Down Syndrome Foundation benefitting the Linda Crnic Institute for Down syndrome. The executive director is Michelle Sie Whitten. Funds raised have yet to be announced for this year’s event, but prior to the 2014 fundraiser, the event had raised $7.6 million for Down syndrome research, medical care, advocacy and education. David Tolleson, executive director of the National Down Syndrome Congress located in Georgia, praised their ability to raise funds, secure matching dollars and feature celebrities. “Down syndrome is woefully underfunded and (the foundation) is the global leader in bringing attention to that lack,” he said.

Johnson is most known for being the first African-American supermodel. She landed on the cover of Vogue magazine in 1974, making world history as the first African-American model to ever grace the acclaimed magazine’s cover. Her career, which spans four decades, is a showcase of accomplishment: from model to mom to actress, author, activist, businesswoman, TV personality, and — finally — icon. She has also been a spokesperson for several causes dear to her heart, namely Down syndrome. Her first cousin and niece have Down syndrome.

She concurs with Tollenson: “It’s one of the least funded. It has a stigma and a taboo. People don’t understand so they shun people with Down syndrome. The children are treated cruelly and have very specific medical needs.”

As she helped with her niece over the years, she said she “almost felt like am I doing enough? I look at my sister and say to myself, what can I do? I get more out of this (serving as an ambassador) than the kids. It’s such food for my soul.”

She says her 26-year-old niece Natalie Fuller is a gift. “Then to bump into this group of people is a ‘God-send.’ Fuller, who graduated from high school in 2007, has attended and worked at Hi-Hope Service Center in Georgia for the past six years, where she is a very active member of client council. She has been a model in the fashion show for four years.

In her efforts over the years to find various support for Fuller, she has run into disturbing data. The foundation reports that Down syndrome has nothing to do with race, nationality, socioeconomic status, religion, or anything the mother or father did during pregnancy. But, a study published in June 2001 by the Center for Disease Control and Prevention indicated a stark racial disparity in the median life spans of people with Down syndrome. The study based on an analysis of 34,000 multiple-cause mortality files from 1968-1997 indicated that the media age of death for white people with Down syndrome is 50 years, while it is 25 years for Black people and 11 years for people of other races.

Having a diverse list of advocates and advocates helps to raise awareness to these types of issues, DeOndra Dixon, the inaugural Q Award recipient in 2011 is little sister to Hollywood actor Jamie Foxx. She travels around the U.S. and represents the foundation at conferences and events. Foxx, who was in attendance with his sister, told the story of her coming to a shoot for one of his videos. She had a clip-on ponytail in her purse, ready to dance. She said, “Big bro, don’t leave me out.” Since then she has performed at the Grammy’s and went to Congress to talk about Down syndrome. “It’s great to see that confidence,” he said.

When asked what she wanted people to know about people with Down syndrome, she said, “I’m talented. I like to sing. I get it from my brother.

Perspective on the Modeling Industry
As a model for four decades, Johnson has appeared on more than 500 magazine covers from Vogue, Glamour and Cosmopolitan to Essence, Ebony and French Elle. Her success during the 70s and 80s transcended race, as she became a household name. She signed with the Ford Modeling agency and was one of the highest paid models in the industry in a very short period of time. The New York Times named her as one of the “20th Century’s 100 Most Influential People in the Fashion Industry.”

When she looks at the industry today, she is “proud and happy to see the actual diversity of modeling industry, with Alec from Africa, Gisele from Brazil, and Joan Smalls of Russia. I love the global feeling of the industry. Really wonderful.”

She is disappointed, however, in the designers. “In the 70s when I started there were more African American models and designers. Now I’m on the other side and sit in front row at Fashion Week. Big fashion designers exclude models of color. The audacity!”

In recent years, she has appeared in Tyler Perry’s movie “Good Deeds.” Last year, she launched her reality show, “Beverly’s Full House,” on the Oprah Winfrey Network. She has signed with Simon & Schuster to publish her memoir, which is to be published in early 2015.

When asked about retirement, she says “You never want to stop using your mind. I don’t believe in retirement.”

Quotes of Inspiration from the Be Beautiful Be Yourself Fashion Show
Event Chairs Sharon Magness Blake and Ernie Blake greeted the crowd by saying they’ve participated in various events over the years, but “None has been as much pleasure as great an honor as this one,” said Blake.

Tasha Smith, banking officer with First Bank, said, “We really value our community. We know and love the work they do. They do so much for kids. It’s important for us to support anyway we can.”

Deon Gillespie, who serves on the State Development Disability Council for the last two years, volunteered at the event. “In a very short time this has become the premier foundation for research on Down syndrome. I really admire the work they are doing,” she said.

Editor’s note: For more information about the Global Down Syndrome Foundation and their partners, visit www.globaldownsyndrome.org