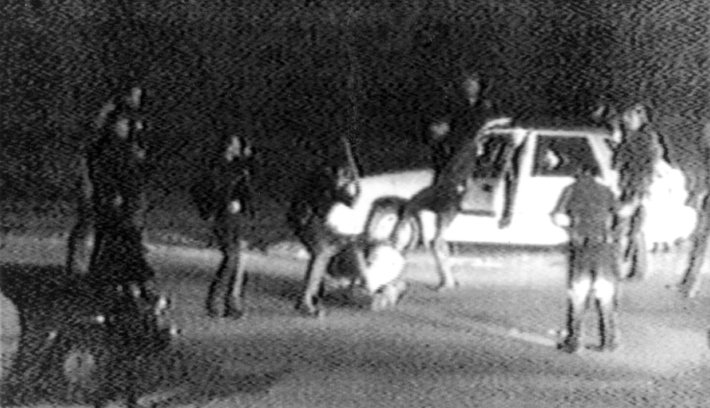 A Desperate Cry for Drastic Change

A Desperate Cry for Drastic Change

On March 3, 1991, a white man named George Holiday shot a video of a man being beaten by a group of policemen. From his balcony in Los Angeles, he videoed Rodney King rolling on the ground while being kicked and hit with batons in the presence of 14 LAPD officers. The video was sent to the news, Los Angeles caught fire. But in the end, the four officers were acquitted by an all-white jury.

Almost 30 years later, another video of police brutality surfaced when the life of George Floyd was ended by a well-placed knee on his neck. This happened in front of dozens of witnesses and cameras in broad daylight. Black people let out a collective scream of pain and agony that has probably not been felt in decades. Not only have police relationships with the Black community failed to get better, but things also seemed to become decidedly worse. In the aftermath of this video, other atrocities by police against African Americans quickly followed. Out of the fog of anger, disappointment, and sadness, a new slogan surfaced that caused even more confusion and division: Defund the Police.

I was one of the lucky ones. The first time I heard the term “Defund the Police,” a simple explanation came with it – The police department will not be disbanded. The money the police use that buys military-grade weapons and equipment will be put back into the neighborhoods the police serve. The money could help fund job training, education, businesses, etc. However, even after I listened to the explanation, I thought to myself, “Couldn’t they have come up with another slogan to use?

Then, things became murkier. I quickly learned from other experts that Defund the Police, was precisely what it sounded like. Get rid of the police. Use the money in the neighborhood instead. The thought behind it is that the relationship between African Americas and the police is so bad, we are better off without them at all.

The term was first talked about during the Ferguson unrest in 2014. But after the public murder of George Floyd by police and the information about the death of Breonna Taylor, and the outrage of after Rayshard Brooks was shot two times in the back while running from police in Atlanta, the slogan quickly gained momentum.

The country is fighting for its life on three fronts at the same time. The pandemic has killed almost half a million people worldwide and 122,000 Americans have died from coronavirus as of this writing. The experts say we are only at the beginning of this pandemic. Economic woes are the direct result of shutting everything down during the pandemic. Some businesses will never recover, and unemployment is at an all-time high. Just when we thought this was the worst thing that could ever befall our great nation, an African American male is murdered by police in broad daylight. Only one of these problems by itself could have been the most devastating event since WWII. But by experiencing all of these events simultaneously, this country is now at a crossroad that threatens democracy in America. So far, I have not even mentioned Trump and the upcoming election. But I have the feeling things are not going to get better.

The racial aspect of policing has been around for a very long time. According to Dr. Gary Potter, policing policy was based on the system in England. Colonists used an informal and communal system which was called a Watch. This communal system evolved into the Slave Patrol in southern states. Their job was to catch and return runaway slaves, discipline slaves, and to terrorize the slaves in any way possible.

The relation between law enforcement and African Americans has never recovered from those earlier encounters. A study of what happened to Trayvon Martin proves that point: A Black, unarmed teen who did not commit any crime did not even have the right to protect himself, against an armed, self-described white vigilante. Today, many Black men, regardless of social standing or income, or religion, still cringe when they see those flashing red lights in their rearview mirror. That cringe has nothing to do with being caught for a crime, that cringe is because they know, regardless of the circumstances, that their life can end needlessly with any encounter with the police. The wrong glance can even get your head bashed-in. Most Black men have a least one story about an encounter with the police that did not go very well.

Regardless of where you stand on defunding the police, when you carefully study the history of policing Black people in America, it is easy to understand why such a radical idea has gained so much traction.

MPD150 is a community advocacy group based in Minneapolis. Their reasoning is why send armed strangers with guns to a situation that may require healthcare workers, victim advocates social workers or mental health providers. Instead of armed Warriors, Black neighborhoods need education, jobs, and comprehensive healthcare.

City police budgets are sometimes astronomically high. Many neighborhoods suffer from poverty, homelessness, joblessness, and of course, crime. Many of these crimes are laws that seem to only affect poor people. People with money rarely get arrested for vagrancy, trespassing, or being chased from the area because they have no other place to stay. These same neighborhoods have poor schools, little healthcare, and high unemployment. I do not think it is a bad idea to take some of the funds from the police to spend it on programs and organizations that can tackle some of the root causes of poverty.

Even with all of the fantastical events taking place in the year 2020, and even with the energized antiracist organizations making their voice heard and the energy behind the movement, it may be unlikely that defunding the police will be a widespread phenomenon outside of a few experimental areas. However, I never in my wildest dreams would think that America would be in such a state of division. I never thought that our democracy would be on the verge of collapse because of all people, Donald Trump.

In Minneapolis, the city council announced that they will disband the city’s police force. But even council members are unable to say what a community without police would be like. Most reasonable people would agree that significant changes will have to be made. It is not a bad idea to reallocate spending as opposed to disbanding police altogether. This slogan seems to be born more out of anger and outrage as opposed to a well thought out plan. And it only leaves Trump followers something to translate for his followers.

I dislike the slogan. I not only dislike the slogan for its ambiguity but also for the literal meaning that some are pushing. It just gives us another argument to traverse while on our way to the November election. But I have to admit, I understand why an idea like this is gaining so much momentum. And even if someone says that defunding the police is ridiculous; it is nowhere near as ridiculous as a man being murdered in public by the police, for an allegedly $20 infraction.