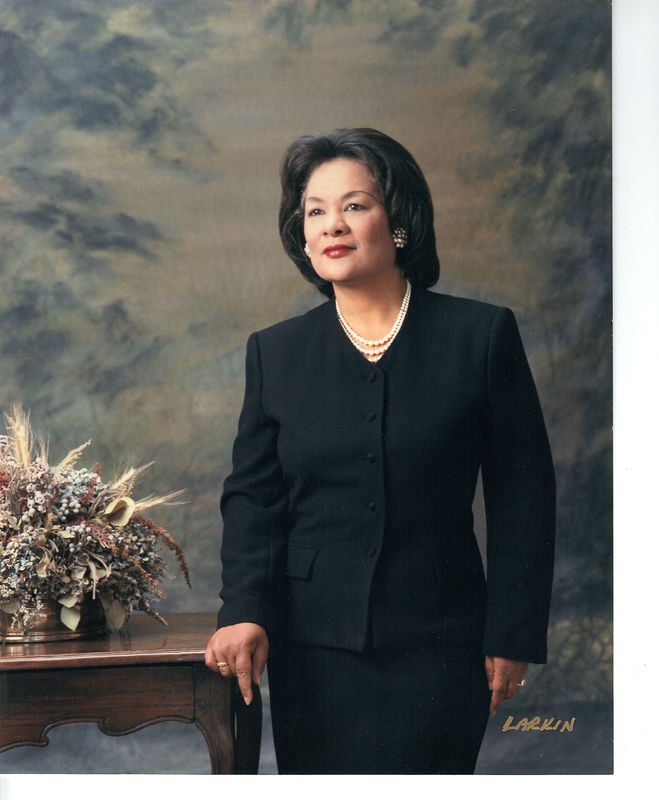 Wilma J. Webb, a 13-year former Colorado State Representative who initiated, delivered, and established strong laws which elevated our cities, our state, and our nation to a better place for all, is the mother of Colorado’s Dr. Martin Luther King, Jr. Holiday, inductee to the National and Colorado Women’s Halls of Fame and has won numerous state and national awards, including The National Education Association Carter G. Woodson Award for Human and Civil Rights.

The Denver Art Museum recognized her contribution to the arts community as First Lady with a bas relief sculpture of her.

Wilma’s latest project is preserving her husband’s legacy as Denver’s first African American mayor. Wellington E. Webb served 12 years from 1991 to 2003 as Denver’s 42nd mayor. The city’s Wellington E. Webb Municipal Office Building was named in his honor before he left office, but there is no corresponding information in the building, which leaves many new Denver residents and younger generations wondering, “Who is Wellington E. Webb?”

For example, in early 2019 some school students were touring the building and asked their teacher who is Wellington Webb? Their teacher incorrectly replied, “The first black governor of Colorado.”

“It is very important that we have a sculpture of Wellington and the history of his mayoral administration in the Webb Building so that younger generations and people new to Denver don’t incorrectly think he’s an Englishman from London because of his name,” Wilma Webb said. “A name on a building with no context does little to inform the public why this man has a building named in his honor.” 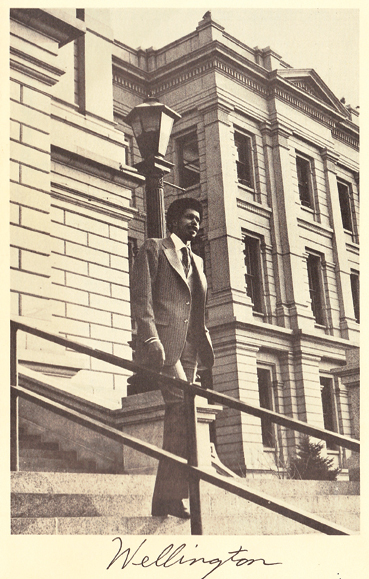 Wilma lobbied for a photograph of Mayor Webb to be placed in the Webb Building, which was completed in 2018. She has commissioned Denver artist Ed Dwight to build the sculpture and is working with the city on proper placement of the sculpture in the Webb Building. She also created a non-profit called “DM42” (Denver Mayor 42) to raise money for the sculpture, which will be financed privately with no city tax dollars.

As mayor and First Lady, the couple worked tirelessly to improve the Mile High City for all residents. They opened city contracts, including airport concessions and artwork, to allow women and minorities more opportunities to compete and contribute. Since leaving office, the couple has continued to be active in city, state and national politics and are outspoken on social justice issues, in addition to supporting younger generations of aspiring political and community leaders.

Over the next two months, we will look at Wellington Webb’s life in more detail, including his long service in city, state and national politics. This month we focus on Wilma J. Webb in honor of National Women’s History Month.

Born to Frank and Faye Gerdine in Denver, Wilma is the first and only Colorado African American woman who has served with distinction on all three levels of our government.

She is the first woman to have been elected to represent House District 8 in the Colorado House of Representatives, and the first African American woman to serve on the powerful state Joint Budget Committee. Among her many accomplishments in the legislature, Wilma was the first legislator to introduce a bill for full-time kindergarten in Colorado; introduced and passed legislation to grant the Colorado Civil Rights Division and Commission subpoena powers; and introduced and passed legislation that created a statewide substance abuse treatment program.

She also strongly supported a bill to have Denver Public Schools Board of Education members elected by districts, rather than all members at-large, to assure minority representation on the board.

She is also the first woman appointed by President William Jefferson Clinton as the Secretary’s Representative for the United States Department of Labor for the States of Colorado, Montana, North Dakota, South Dakota, Utah, and Wyoming.

She was the first active First Lady of Denver, taking on many roles and projects. Her work as Chairperson of the Mayor’s Commission on Art, Culture, and Film included delivering major art pieces for the city, including Ed Dwight’s I Have A Dream sculpture for Denver City Park, Botero’s Man and Woman, in the Galleria of the DCPA, and Jonathan Borofsky’s The Dancers, at the Denver Center for the Performing Arts, and murals at Denver International Airport.

She has chaired and served on numerous national, statewide, and local private and governmental boards and commissions including the Martin Luther King, Jr. Colorado Holiday Commission, the Democratic Committee on Housing, the National Compliance Review Commission, the International Women’s Forum, the Channel 9 Who Care Awards Board, the Governor’s Job Training Coordinating Council, the Denver Planning Board’s Advisory Committee, and many others.

She is the honoree of several hundred national and statewide commendations, including the National Humanitarian Award presented by U.S. Senator Ted Kennedy and Mrs. Coretta Scott King, The National Human Rights Award, the Association for Retarded Citizen’s Legislator of the Year Award, The Colorado Banking Association’s Political Award, and an inductee into the Blacks in Colorado Hall of Fame, to name a few.

Her education includes the University of Colorado Denver, is an alumna of Harvard University John F. Kennedy School of Government, and she holds Honorary Doctoral Degrees from the University of Northern Colorado, the Art Institute of Colorado, and is a graduate of Denver’s Manual High School.  She is a member of Zion Baptist Church, and the professional women’s organizations of Delta Sigma Theta Sorority, Inc., and The Links, Incorporated. 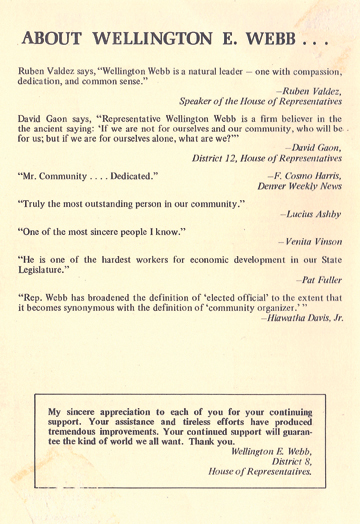